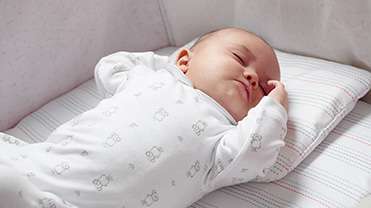 During the first 3-4 months it is advisable to let the baby sleep in his cot, because it is a cosy and safe place that makes the baby feel protected and safe, reminding him of the feelings experienced even before he was born. We advise to keep the cot close to the parent's bed because the Mum - baby closeness has positive effect for both of them and protect the baby from the SIDS risk. It is, on the other hand, not advisable to bring the baby in the parent's bed because it is dangerous for the baby! A lot of parents use for the baby carrier of the pram for their baby sleeping, it certainly has appropriate dimensions but, being used for his strolls outside or on the car, can be full of impurities and then not so healthy.

When, later, the baby reaches a certain degree of freedom of movement, it is advisable to switch to a bed with sides, in his room, ensuring that the product meets the safety requirements set by the European legislation, above all with regards to the distance between the bars (6.5 cm), to avoid that his head gets stuck.

When the baby has grown up enough for attempting to get above the sides, lowering them to a height which is just enough to protect him while sleeps but letting him free to climb down when he wants it could be less dangerous.

Regarding his pillow, it has to be very low, made of Memory Foam for preventing any flattening of his head due to the supine position. Later an alveolar structure pillow, suffocation sage and anti-mite.

Spend some care to the mattress as well which should have the same size of the bed to avoid leaving dangerous spaces where the baby could get trapped, furthermore it's better that it is anti-mite, anallergic and breathable.